To call this a new article is a bit of a stretch. I first started writing this article in 2013. I planned to write a Research Commentary for JRME (a fancy math ed journal) on what I saw as the stark differences between 1) math ed research and 2) special ed research on math. I noticed that the methodologies were different, the pedagogical theories used were different, and the kind of mathematics studied were different. I realized that I did not want to just assume these differences existed; I wanted to study them empirically. So I took one year (2013) and began analyzing every article I could find on math teaching and learning, comparing those that included disability to those that didn’t. I presented my findings at NCTM in 2014 and that was how I met Paulo Tan, who became my collaborator on this project.  Together we added 2014, then 2015. We were rejected by one fancy journal in 2015, another in 2016. In 2017 we submitted it to another fancy journal and were rejected after several rounds of revisions including adding 2 additional years of analysis (2016 and 2017).  We submitted to Mathematics Education Research Journal in 2019 and it was accepted. The editors wanted to add it into a special issue on inclusion and mathematics in the Australasian, and so we added additional analysis on the Australasian context. Here is a link to the article at the journal site– I think there are some free downloads. Also here it is in preprint (free earlier draft) Lambert Tan 2020_Preprint Draft_MERJ

We learned a lot through this process, including what the word Australasian means. First, it takes a long time for articles to get published. It is a long slog. Second, I learned that peer reviewers want you to stick close to your findings in an article, and do not allow exciting, bold pronouncements. We had to cut many of those over the years. But I also feel we faced some unfair criticisms. We were told that our paper was clearly biased towards qualitative research over quantitative when we were simply noting that most research in special ed is quantitative (over 80%). One reviewer said that the implications of our findings were clear- math ed is broken and needs far more quantitative research.  We were told by a reviewer that adults over 18 with disabilities were not adults, and we should include them and compare them to nondisabled children (?!what the unholy ableism?!). We were told that we had an agenda that was anti-special education, that this was an ideological crusade. That may be true, but that is exactly why we engaged in such an extensive empirical review- we did not want to make unsubstantiated pronouncements about the difference between educational research for kids with and without disabilities. We wanted to be able to show what was actually happening, with data backing up our claims.

Please see the paper itself for lots on the methods, but here they are very briefly- we gathered as many articles on math teaching and learning as we could find for the years 2013 – 2017 (5 years) from 88 separate journals (over 2400 articles). We coded all those articles for the methodology (how the research was done), the age of the participants, the math that was studied, and the theoretical orientation of the research project. Using the titles, abstracts and keywords of each article, we separated these articles into those that focused on Disability (including an explicit focus on disability and/or math difficulties), calling this group the Disability Set. We had 408 articles in this set. The No-Disability Set were articles that had no clear focus on Disability (based on just the title, abstract and keywords). We had 2069 articles in that set. So keep in mind that the No–Disability Set is larger. We then analyzed these two different sets using the coded categories.

So, what do you notice and wonder about this graph? How is the method of research different for students with disabilities? 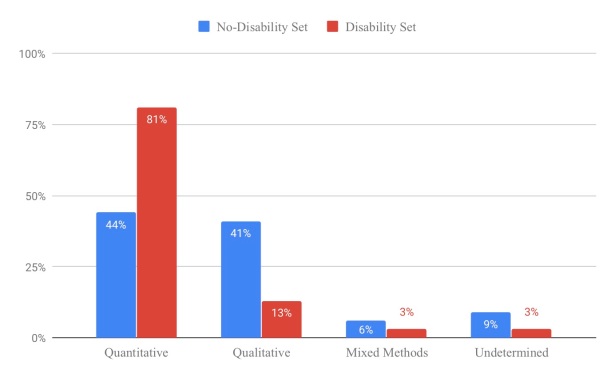 While math ed research is about evenly split between quantitative and qualitative research, students with disabilities are far more likely to be included in quantitative studies. Disability is understood through numbers and big data, while other math learners are understood through close analysis and description. Why are these methods so different? What kinds of implications do you think this has for teachers? For kids?

We found that some disabilities are studied more than others. This graph shows the number of articles in this 5 year period that had an explicit focus (in the title, abstract or keywords) on a particular disability category. General means that the article focused on “special education students” or “students with disabilities” without a specific focus. Learning Disabilities in general was the category that was most studied, with 48 of those 116 articles focused on Mathematical Learning Disabilities/dyscalculia. 83 studies were on students who were labeled as having Math Difficulties or other euphemisms for students who were having difficulty specifically in math. The number of studies we found on students with Intellectual Disabilities, Autism, Emotional Disabilities, ADHD, and students with hearing and visual impairments were few. 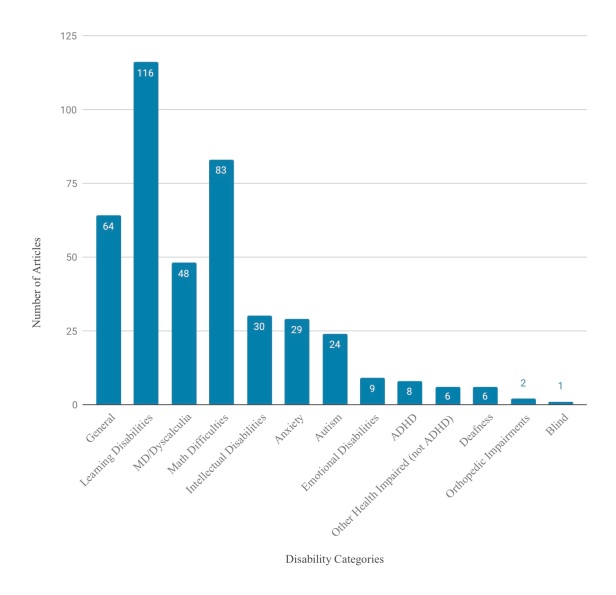 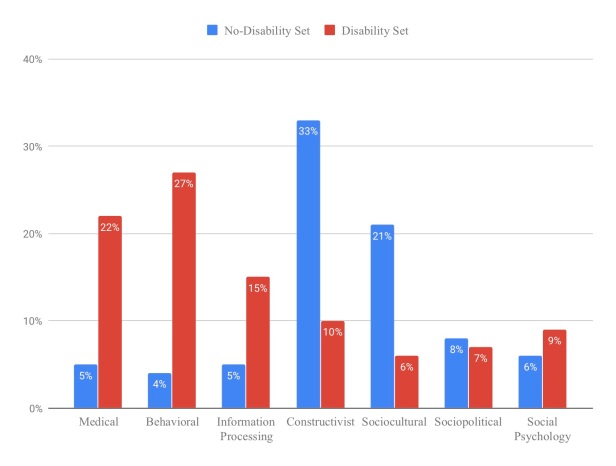 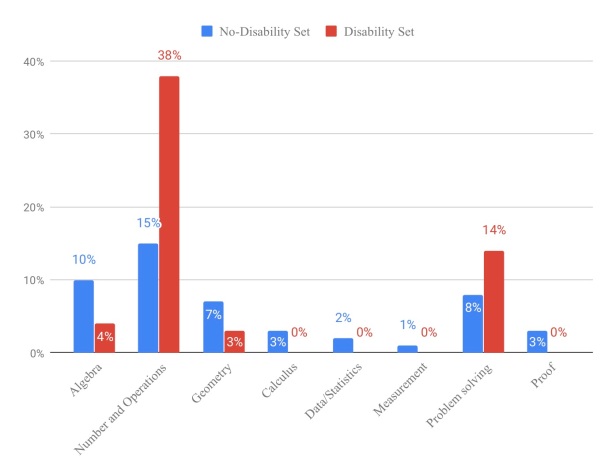